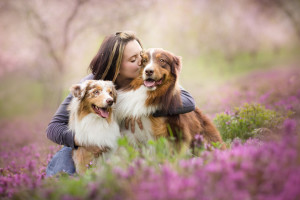 History of our kennel is not as diverse as we would like, yet it does not mean that we are less enthusiastic into Aussie breeding than other kennels. In fact, we are really thrilled by it. We love dogs and getting better at breeding more than anything.

Our first meeting with Aussies caught me and my boyfriend completely off guard. We accompanied our mutual friend on a way to a farm where he was going to pick up Russel terrier puppy. To our surprise we were not welcomed only by lively terriers, but also by colorful, shaggy, agile and visibly intelligent representatives of the breed which we had not even heard of at the time. Although it was only a fleeting acquaintance lasting only a few minutes, we were slowly beginning to realize that this may be fabled love at first sight… which could easily last for a lifetime.

It didn’t take very long until we found our chosen brown ‘teddy bear’ with a suitable name Indiana Jones. He was born in the Great Lady kennel in late April 2012 and after necessary approval from family members was pretty obvious that the deal is settled. He was so freakin’ cute from the photos and even more in person! We named him Barney.

If you think that life with a lively and playful Aussie puppy is a cakewalk, do not be fooled. The first few months were really hard for inexperienced rookies like us. Every night we had to woke up several times for a walk, during the time his teeth were growing up we suffered biting and tweaking, we were furious because of his stubbornness and disobedience. Well, now we can say it was all 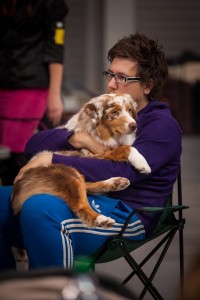 worth it. We finally won the battle for the leader of the pack and now we have just absolutely amazing and loyal dog.

Do you know what they say about Aussies? ‘Every owner will eventually buy another one’. Well, it is no different with us. Endless struggle with taming of Barney was apparently not enough and by the time Barney was 6 month old we had found the perfect girlfriend for him. It was warm summer day in August when Marion Ravenwood – ‘Lillie’ – was born in Gemmell kennel in Tennessee, USA. When you want to import a puppy from abroad there is always a chance that there will be some complication, especially when you and your chosen puppy are 8,000 kilometres apart. Fortunately for us, everything turned out to be fine. In November, Lillie had flown from Nashville to Frankfurt where we picked her up and went to our home in a town near Prague.

If you compare our small red merle girl with Barney, you will find out that Lilly is definitely calmer and less arrogant. On the other hand, she seems to be lacking Barney’s diverse personality. She is like Dalai Lama in dog world – her life goal seems to be giving love and joy to everyone around her. Although her tail was bobbed right after her birth, it does not mean she has trouble expressing her feelings. Lillie is extremely jolly, we always find her smiling and wiggling her rear and if it was possible she would be smiling even in her sleep.